0
Price
€59
Price
€59
Terms and Cancellation Policy
The total cost of the service booked will be charged soon after the booking.You can cancel free of charge up to 48 hours before the service (we will reimburse your payment). Late cancellations and no-shows are charged in full and no refund will be possible. For tours cancelled due to inclement weather, you can choose an alternative date; if an alternative date is not possible, you will not be charged a penalty.
8 hours
Availability : Every Tuesday from from April 6th to October 26th 2021

Excursion from Sorrento to Paestum and Salerno. Also includes the real Mozzarella Experience

Paestum is famous for two things, its ancient Greek temples and its Mozzarella. The temples considered some of the best-preserved temples in the world and the Mozzarella is unparalleled.

Depart by bus from Sorrento and drive southwards to the archeological site where you will visit this ancient Greek colony founded in the 7th century BC with its three best-preserved Greek temples in the world. You will also visit Paestum’s museum which displays many fascinating artifacts, such as sculptures and tomb paintings discovered during excavations.

After visiting the temples, you will stop in a local farm, where the famous buffalo mozzarella cheese is produced, entirely made by hand and exclusively with buffalo milk. Here a guide will show you the daily production and the stables where the most avantgarde techniques of milking are used, to safeguard animal welfare, hygiene and milk quality.

At the end of the guided tour you will have a taste of this exquisite product followed by free time where you can purchase, for example, lunch from the farm’s own bistro or of course if you prefer you can bring your own packed lunch.

Prices includes:
Price does not include:
Things not to forget: 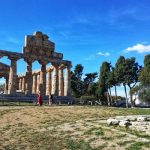 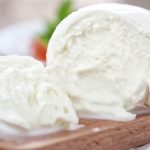 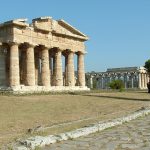 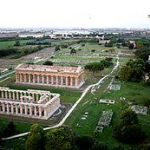 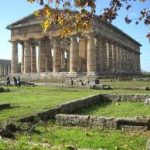